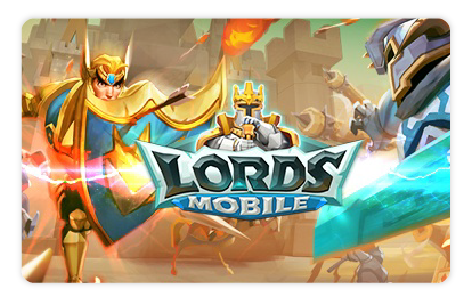 Step into the world of Gaming through Lords Mobile gift cards

The recent times have seen the rise of virtual games that have taken the world by storm. For example, Pubg, remains as one of the undisputed leaders in the world of gaming till date. Lords Mobile takes you into the fantasy world of kingdoms and dynasties where you are responsible for uniting all the existing kingdoms under one rule. The various strategies involved in this process are so well curated that it looks real life and hence has been able to connect with such a wide audience globally. Lords mobile has been developed by IGG.

With Lords Mobile gift cards, you can win your friend’s heart

Lords Mobile is basically a free game, that can be played on Android, IOS or Steam. It was released and published in 2016. It managed to bag the Google Play Awards for "Best Competitive Game in the same year and that was a feather to its cap of success and popularity. It involves real-time strategy about troop formations and role playing in the process and that is how you are supposed to increase your army base to conquer the territories and leaders and bring them under your rule. All of this makes the player involved a lot and because it also is a multiplayer game, it helps in building a community of gamers.

Why should you buy Lords Mobile gift cards?

Lords Mobile can be downloaded for free on your PC or your mobile. But to proceed in the game, you need to make several in-app purchases. Instead of purchasing the paid packs individually, it is best to buy Lords mobile giftcards and you can use them to redeem later. So if you are looking to gift your peer something for his or her birthday, there can be nothing that would be more welcoming than a Lords mobile giftcards or vouchers. Not only would it be value for money, but it would also help him or her to stay ahead in the game!!!

What can you purchase using Lords Mobile giftcards?

Let us look at some of the in-app purchases that are the best packs to be bought to be on top of the game. Login Gifts starting at $1.99, The Royal Trade pack that comes for %9.99, that helps to build your gear quickly, the Summer sunshine pack that is for $9.99 that is useful for those into the Infantry and Ranged gear. If you want 50 Bright Talent Orbs you need to go for the “a night of mystery” pack that comes for $4.99. Having said all of this, it would be a blessing if you buy a Lords Mobile giftcards for your friend or peer, and in no time, you would be their best friend!!!

While you build you own empire virtually, help yourself and your friends to be on top of the royal game by using these giftcards and vouchers!!! Let that little competitive kid inside you get a leash of fresh air through Lords Mobile gift cards!!!

For additional questions, you can leave us a message here, and we will get back to you shortly!